Madison Township is one of thirteen townships in Butler County. Located in northeastern Butler County just west of Middletown, it had a population of 8,448 people as of the 2010 census. While it surrounds the city of Trenton, the city is no longer part of the township. It is named for James Madison, president of the United States at the time of its creation in 1810.

The Pilgrim fathers brought the township form of government to America in 1620. This unit of local government, still referred to in New England as the 'town', spread eventually as far west as the Rocky Mountains. It is found today in twenty-two states, known either as the town or the township.

In Ohio, the township predates our state government. The townships' size and shape were determined by the Congressional Acts which established the various land grants. All of the lands defined by these acts were surveyed under the range and township system, except for the Virginia Military Lands. Some of these lands were sub-divided into townships five miles square - such as those in the Connecticut Western Reserve that was established in 1786. The others were surveyed into townships that were six miles square, as in the Congress Lands, 1789-1801. within each of the Ohio land grants, Congress set aside sections of the land for the use of schools and the support of religious institutions. In the Symmes Purchase, for example, Section 16 of each township was reserved for schools and Section 29 was set aside for religious institutions.

As the Ohio Territory became populated, it was only natural that the surveyed townships become the basic unit of local government. In 1804, the elected officials of a township consisted of three trustees, a clerk, two overseers of the poor, and a sufficient number of supervisors of highway, in addition to justices of the peace and constables. A township treasurer and assessor were later added. In the early years of statehood, Ohio township government cared for the poor, maintained the roads, preserved the peace, registered brands and fulfilled the needs of local government generally.

Today, just as in 1804, the township in Ohio is a political subdivision of the state. As such, it has only those powers granted to it by the state legislature and performs functions defined by the state. To keep pace with the demands of changing times, the functions, duties, and obligations of the township have changed over the years. Demands for increase or different services have prompted the state legislature to grant Ohio's 1309 townships the authority to fulfill these changing demands.

Three trustees and a clerk, each elected for a four-year term, administer each of our townships today Officially they fill their offices on a part-time basis, but they are always ready to meet their responsibilities and put in many hours of work to serve their constituents. Their intimate knowledge of their community, its needs, and its citizens enables them to offer more personal service than any other unit of government.

Madison Township is located in southwestern Ohio in the watershed of the Great Miami River. On its borders are three counties-- Warren, Montgomery and Preble- while the township itself is within the county of Butler. Butler County was named in honor of the revolutionary War General, Richard Butler, was was killed near what became Fort Recovery in late 1791 during the Indian Wars. Butler County is approximately 25 miles east to west and 19 miles north to south. It contains about 300,000 acres of land with the census of 2000 showing a population of 332,807. Whereas, the population for Madison Township shows that 8,611 people live here.

The birth of Madison Township is described in the 1882 History of Butler County as follows: 'May 7, 1810 at a meeting of James Smith, James Blackburn, and William Robinson, commissioners on petition of some of the inhabitants of Lemon Township, it was ordered, that so much of the said township of Lemon as lies within the following boundaries, to wit: Beginning on the west bank of the Miami at the southwest corner of township number 1 of the boundary line of the said county of Butler; thence east with the said northern boundary line to the Miami; thence south and southwardly with the meanders of the Miami to the place of beginning,-- shall compose a township which shall be called and known by the name of Madison Township'.

The Township was named in honor of the President of the United States at that time. James Madison, who had served as Secretary of State under Jefferson had been elected to succeed him in 1808 and was a popular president and his wife Dolley, was one of the nation's best-loved First Ladies.

During pioneer days, when the slow-moving horse was the chief means of transportation within the township, its 25,000 acres seemed to be a large area. People began to consider themselves as part of a particular community within the township's boundaries. Each was usually centered around a crossroads village. The first Census of 1820 listed 1228 residents in the township, a figure which increased to 1826 in 1820 and in 1830 to 2229. The villages as listed in the 1830 Census showed Trenton to be the largest with 109 people, followed by Miltonville with 10 1, and West Liberty with 59. Middletown at the time had 530 people. By 1830 the land was settled, so population growth was slow for several decades. By 1870 the township's population was only 2450. By that time the villages were listed as Madison (West Middletown) 158 population; Miltonville, 179; Poasttown, 200; and Trenton, 340. Poasttown, West Middletown and Trenton, along with Brownstown were located along the Great Miami River. Miltonville and Trenton, via the old bridge at Gunckel's mill which carried the traffic of the Franklin-Trenton Road, served as centers for the Elk Creek Valley, as did Poasttown and Middletown for Browns Run. Woodsdale in the extreme south owed its growth to the Miami-Erie Canal and its bridge over the Great Miami, along with the race from the river that furnished the water power for the development of the early paper industry at that point. Since the story of the Great Miami has already been told, that of its two major tributaries in Madison Township will be explored, along with the story of their development and the people who lived there and the towns they founded. 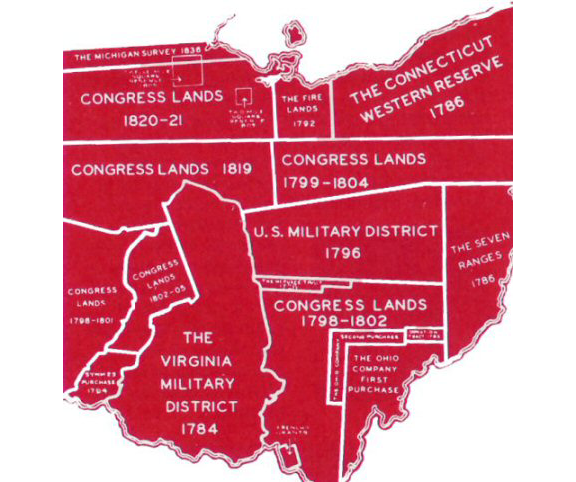 Site designed and hosted by www.StaceyCastle.com